The Past - Louis Dobermann...

Dobermann Pinscher, 1909
The Doberman originated in the late 1800's and was named after Karl Friedrich Louis Dobermann, a tax collector in Apolda, Germany. Mr Dobermann sought to have a sharp, protective dog to accompany him on his tax collecting route, and his breeding experiments were reputedly involved in the development of the breed. Although virtually no records were kept, the Old German Shepherd (now extinct), the German Pinscher (the ancestor of the Rottweiler and Weimaraner), the Black and Tan Manchester Terrier, and the black English Greyhound are believed to have contributed to the genetic make up of the Doberman.

"The Old German Shepherd contributed ruggedness, intelligence, physical and mental soundness, with the Pinscher adding the terrier fire and quick reaction time. The Weimaraner gave to the Doberman its hunting, retrieving, and scenting capabilities. The Weimar Pointer, as it was called, was an all purpose hunting dog. However, it was to the Rottweiler, which the early Doberman strongly resembled, that the breed owes so much of its substance, bravery, and reliable guarding ability".

The breed was officially recognized in 1900. 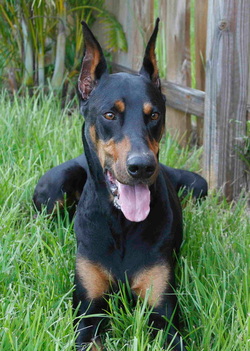 One of the most misunderstood breeds...the Doberman Pinscher is known best, perhaps, for its guarding qualities, but the dog of yesterday has been transformed through years of meticulous breeding into a fun-loving, watchful, protective, and, above all, discerning companion who has no trouble distinguishing between friend or foe.

Among the top smartest canine breeds in the world, the Doberman Pinscher is breathtakingly perceptive, intuitive, and sensitive. For the past 100 years, breeders have been producing a stable, smart, discerning dog capable of doing it all. From loving, loyal family companion, to search and rescue, to agility champ, to service/therapy dog, to police and military protection... today’s Doberman is the aristocrat of canines.